I could have spent many more days in Chefchaouan, but with so much still to see and experience in this incredible country, we must keep pressing on. Ahead of us was a long days drive. Only 199km but that meant a good 5 hour drive!

I was last in Morocco 23 years ago and we caught an overnight train from Tangier to Marrakesh, so I never got to see the northern landscape. It is unbelievably beautiful this country! Green rolling hills and pink marble mountains that seem to go on forever. I couldn’t drink it in enough! 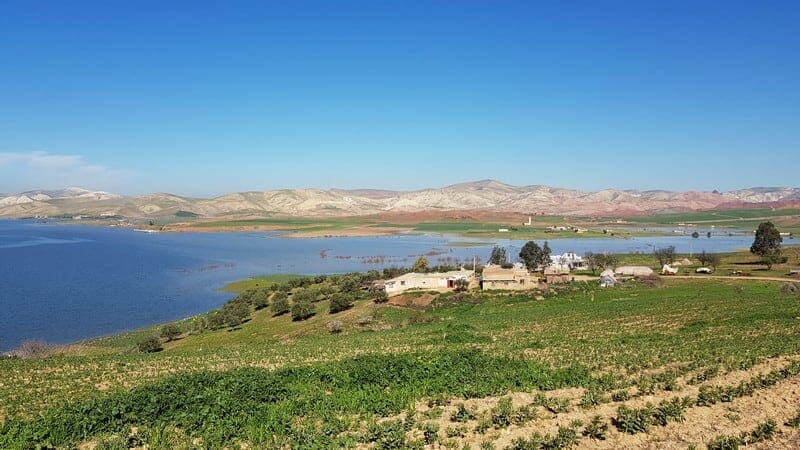 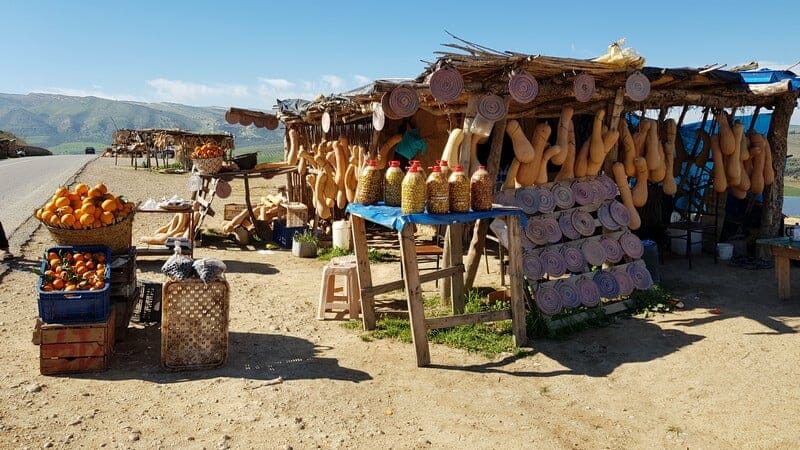 I had pressing work matters so when the other 2 campervans decided to stop for lunch, we pressed on to Fes. As we entered the town, I got a tap on my window by a guy on a motorbike. Were we going to the campsite? Well, we are in a campervan so yes! Which campsite are we going to? Diamante Vert Camping, I replied. Oh that has been closed for the last 3 days now he tells me, all while we are still driving, and he can take me to the other camping. Now I had to make a quick decision. Was he telling the truth or just scouting for business for the other campsite? We decided not to trust him, despite his continued persistence for the next 5 km.

Camping Diamante Vert was open!! It was a fabulous campsite with the best ablutions we’ve had so far. Hot water and toilet paper. It’s the little things that count! The camping was set among huge trees and was so peaceful after the long day’s drive. Our happy trio was shortly reunited and we spent the night in camp as tomorrow would be a busy day.

I woke to find another campervan next to us, this one carrying a British family – Donna, Ian, Jasmine (16 years) and Jed (8 years). Donna and her daughter have travelled most of their lives, living in different countries and homeschooling and now with her new husband and son they have bought a campervan and are permanently on the road. Jasmine has been writing her own blog since she was 10 (www.travellingminstrel.com) and I was hoping she might inspire Tai to do the same. Fingers crossed! Tai and Jed immediately sought each other out – both desperate for some boy on boy time. Sadly, we were on our way into Fes for the day, but I would have loved to have spent more time with the incredibly inspiring Donna, to hear all about their adventures. I guess connecting on Facebook will have to do!

The Diamante Verte campsite had organized a tour guide for the full day along with transfers into and back from Fes. The guide was 400 Dirham (€37) and the transport 60 Dirham (€5,50) per person. The Fes Medina is the oldest medina in Morocco and has more than 9000 streets. Without a guide, we would get horribly lost and would never have found half the places we did end up visiting, so a guide is definitely the way to go when visiting Fes.

We started at the Fes Royal Palace or Dar el-Makhzen. A mere 80 hectare complex that would take more than 2 hours to walk from one side to the other! We stopped at the main entrance where seven huge, ornate brass gates were set into the 5m high turreted wall surrounding the entire complex. There are 1600 rooms in the palace, not that any of us would be allowed to see, as no one is allowed into the palace. Palace staff were hard at work shining the brass with lemon juice, a task that is repeated on a monthly basis. 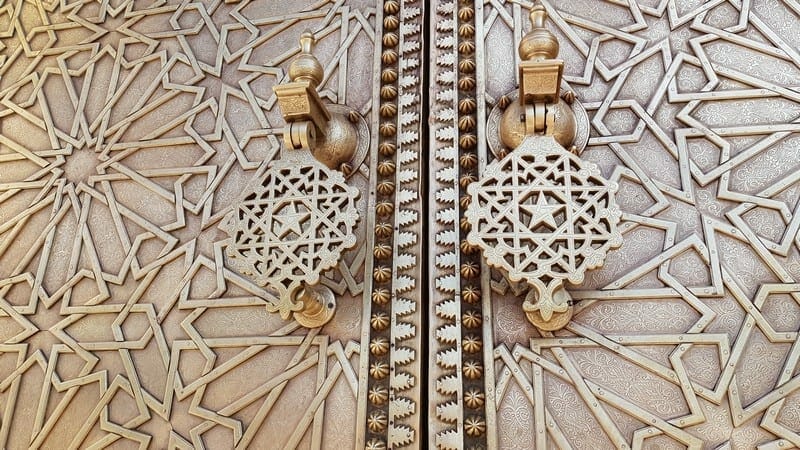 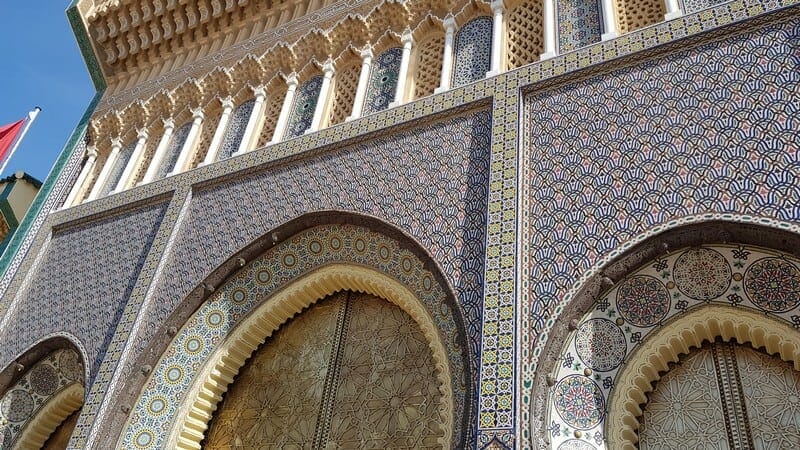 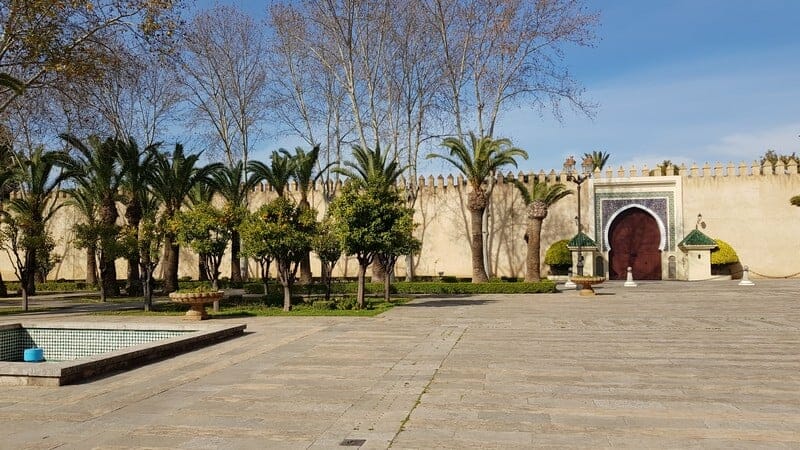 Next, we stopped on top of a hill at the South Fort with its panoramic view over the city of Fes and its 2 million inhabitants. Across the rooftops, on another hill, perched the North fort. Running underground between the two forts is a tunnel that was used to transport food and weapons, which Tai thought was pretty neat. Circling the city were enormous flocks of pigeons, their poop being required by the tannery, making the pigeons a nice income stream for residents of the city. 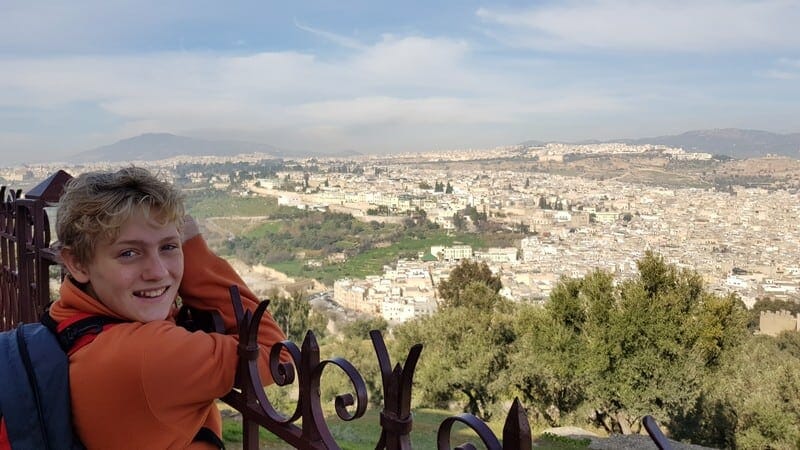 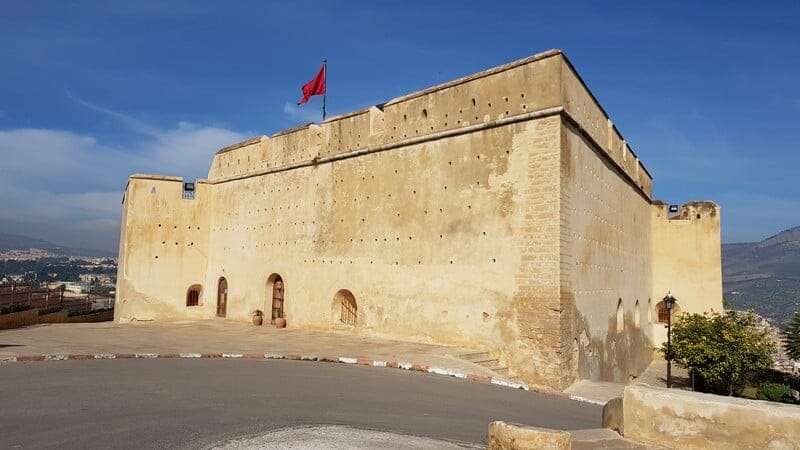 The mosaic factory was next on our agenda, where we watched potters masterfully craft tagines, pots and vases while manually spinning the potter’s wheel by foot. A clay mixture was spread in wooden frames, becoming tiles once they had dried. We watched in fascination as a craftsman skillfully adhered silver filigree to beautifully painted plates and teapots. Everywhere you looked was a cacophony of colour, from mosaic topped tables to intricate drinking fountains. Brilliantly patterned basins, bowls and plates. Exquisitely crafted tea sets and tagines. I could have bought a million things! 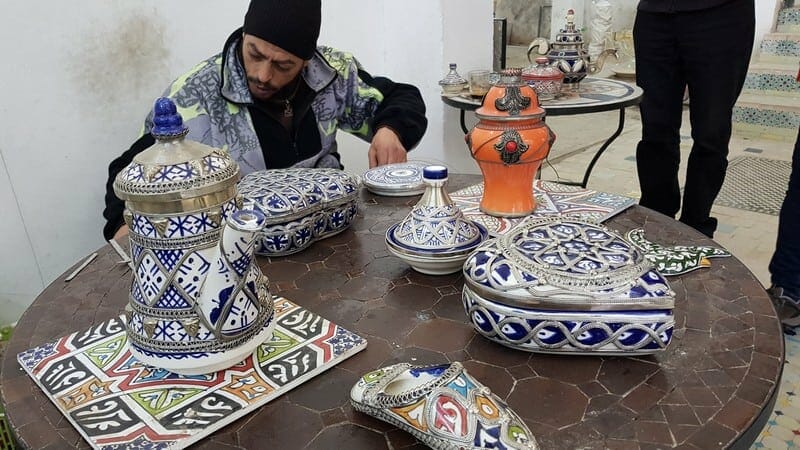 The transfer dropped us and our guide, Mohammed, at the Blue Gate into the medina, where we spent the day wandering down narrow alleyways, enjoying the tranquility in the tropical gardens of stunning riad’s (a Moroccan house), tasting sweet treats of peanut brittle and nougat, our senses in overdrive with the sights, smells and sounds of this ancient medina.

We got special permission to enter a mosque which is used as a school for educating children destined for governmental positions. The ornate woodwork on the doors and balconies is a testament to the incredible craftsmanship passed down through the generations. We were also trundled through various craft shops, obviously, all set up for tourists, with “no obligation to buy”. We did get to see how Argan Oil is made, how scarves and bedspreads made from the Agave Cactus are woven, how mosaics are created and then crafted into tables, bowls and much more. We left the carpet salesman rather unhappy when we decided not to listen to the history of carpet making and hightailed it out of the shop!

The most famous attraction and the main reason for our visit was to see the tannery. It is the oldest tannery in the world and has been in use for more than 3000 years! Looking over the limestone wells of varying colours, one was hit with the pungent smell of kilograms of pigeon poop! This has a high quantity of ammonia which is used to soften the leather. The going rate for 1kg of pigeon poop is 200 Dirham (€18) so families keep pigeons en-mass in order to collect the droppings for some cash. It was fascinating to watch the men sloshing about inside the wells, working with the hides to make them soft and dying them with natural substances like henna.

With the tour over we did a dash past the myriad of leather shoes, handbags and jackets, much to the tannery guides disgust. I hope he had better luck with sales with his next group! 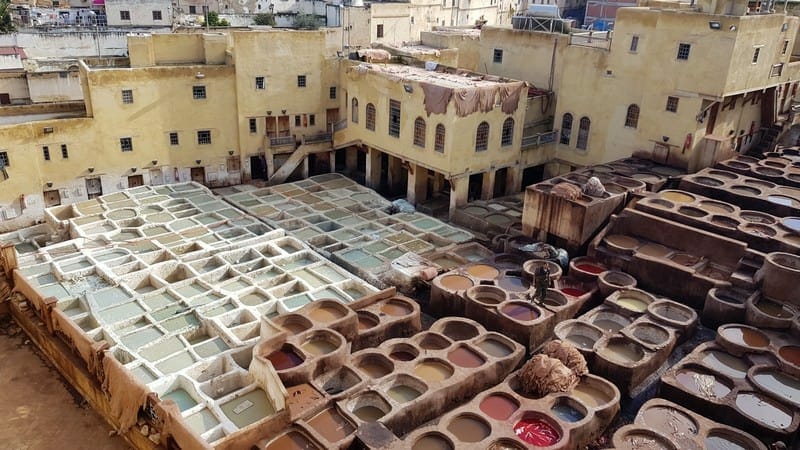 I was wandering along with my GoPro recording when a stallholder suddenly lurched out of the shop and started yelling at me. He was absolutely furious, and I had no idea what he was saying. Our guide quickly intervened, and we scuttled on ahead, but the man was completely livid. Apparently, he had been eating his lunch and he thought I had caught him eating on the video. To be caught on film or photo while eating is a cultural taboo, which is why he was so upset. It was an altogether very unpleasant experience and I was grateful that we had our gentle and mild-mannered Mohammed with us to diffuse the situation.

As a Westerner, I can’t say that I would have a problem if someone caught me eating on camera, but in Moroccan culture, this is apparently incredibly offensive. Had I known this beforehand, I could have avoided the situation. It was just a reminder of how vastly different our cultures are and how important it is to understand and to respect each other’s customs and beliefs. We may not always understand or agree with other cultures, but accepting them and abiding by them creates a tolerance for others in this world. If we were all more tolerant of each other’s differences, we would live in a far happier and peaceful world.

From the pastry street, we passed the clothing section with magnificent velvet jilbabs with intricately embroidered necklines. The coppersmith section was next with white-hot fires and the clanging of metal on metal required for shaping the copper pots. In the woodwork section, we saw bejeweled carriages and wedding couches from which the bride and groom would receive blessings. Piles of strawberries, oranges and avocados brought a shock of colour to the vegetable section before we ran the gauntlet of the meat section. Each kiosk’s meat identified by the blood dripping head of that particular animal – goat, turkey, cow, camel.

With that we were back on the street, sun blazing and cars hooting. This was a completely different world from the inner sanctuary of the medina. We made our way to Nagham Café near the Blue Gate. Highly recommend should you be passing this way! A three-course meal for 80 Dirhams and an amazing view of the old medina.

We started with a huge plate of Taboulah salad, then chicken pastilla, finishing off with crème brulee! The chicken pastilla turned out to be one of my favourite Moroccan meals. Shredded chicken in a light curry with cinnamon and sugar, all wrapped in phyllo pastry. The combination may sound weird and you might think that sweet chicken will be terrible, but it was absolutely delicious!

With bellies full and our senses overloaded, we taxied back to the campsite and fell into bed.
Morocco just keeps getting better and better, enthralling us with her sights, sounds, smells and tastes. Tomorrow we head towards the Middle Atlas mountains and I can’t wait to see what adventures await us there. 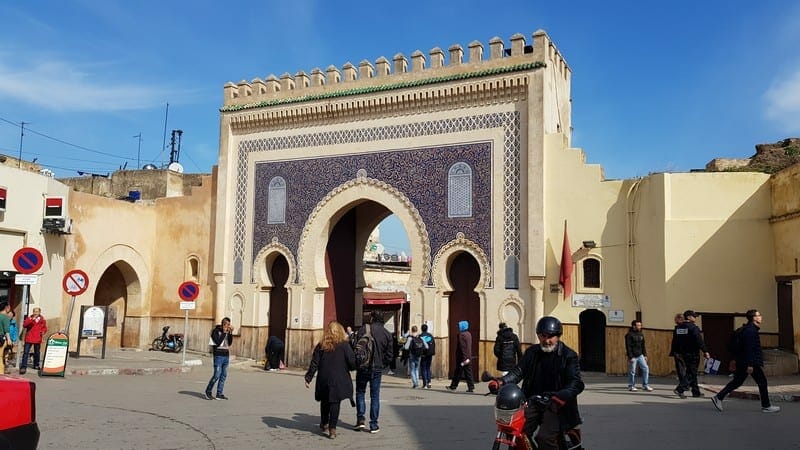 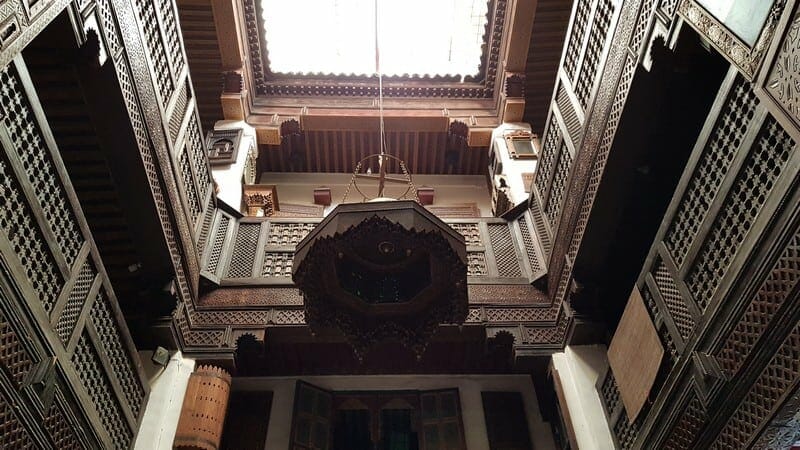 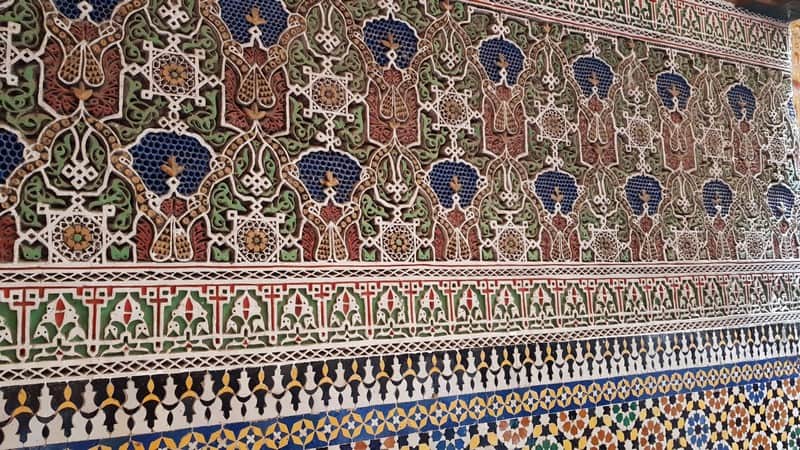 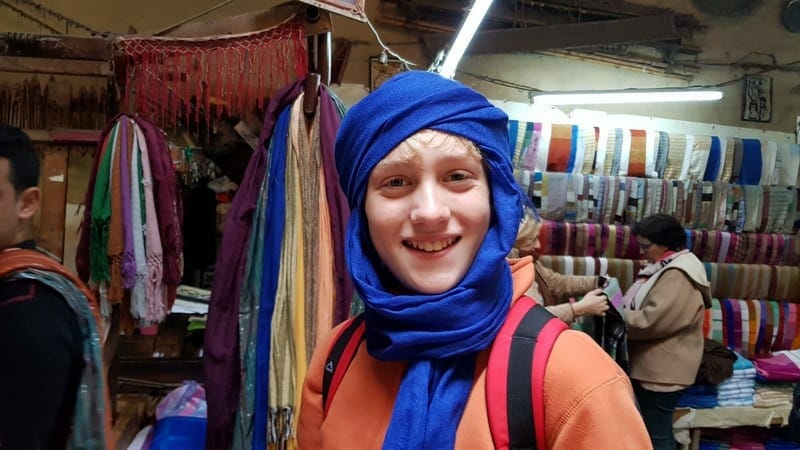 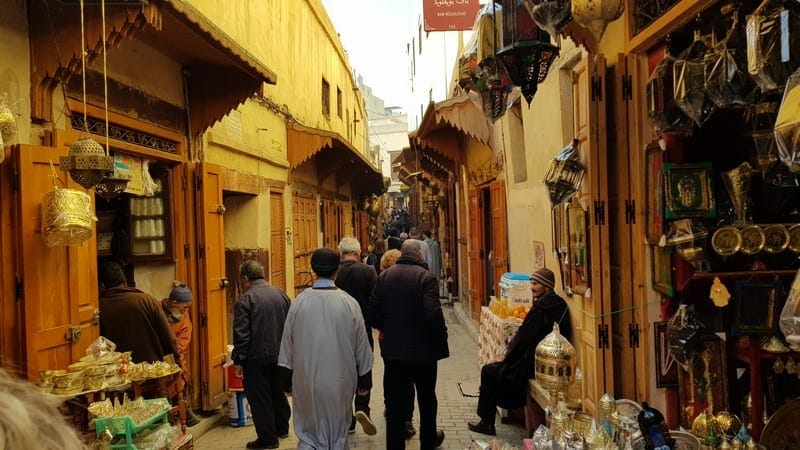 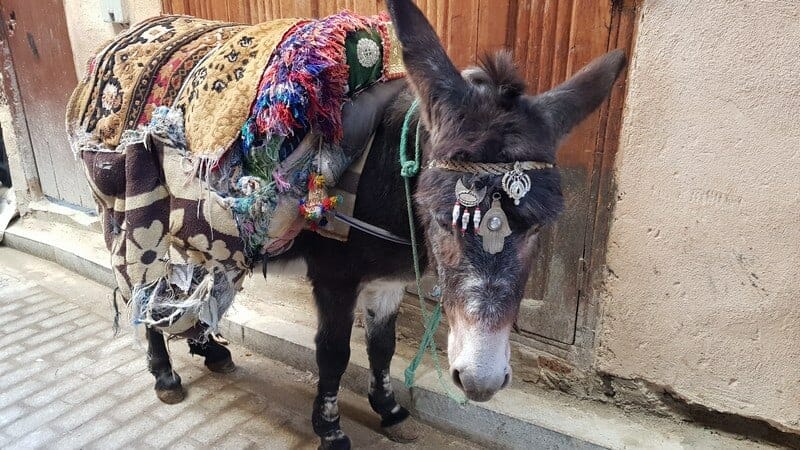 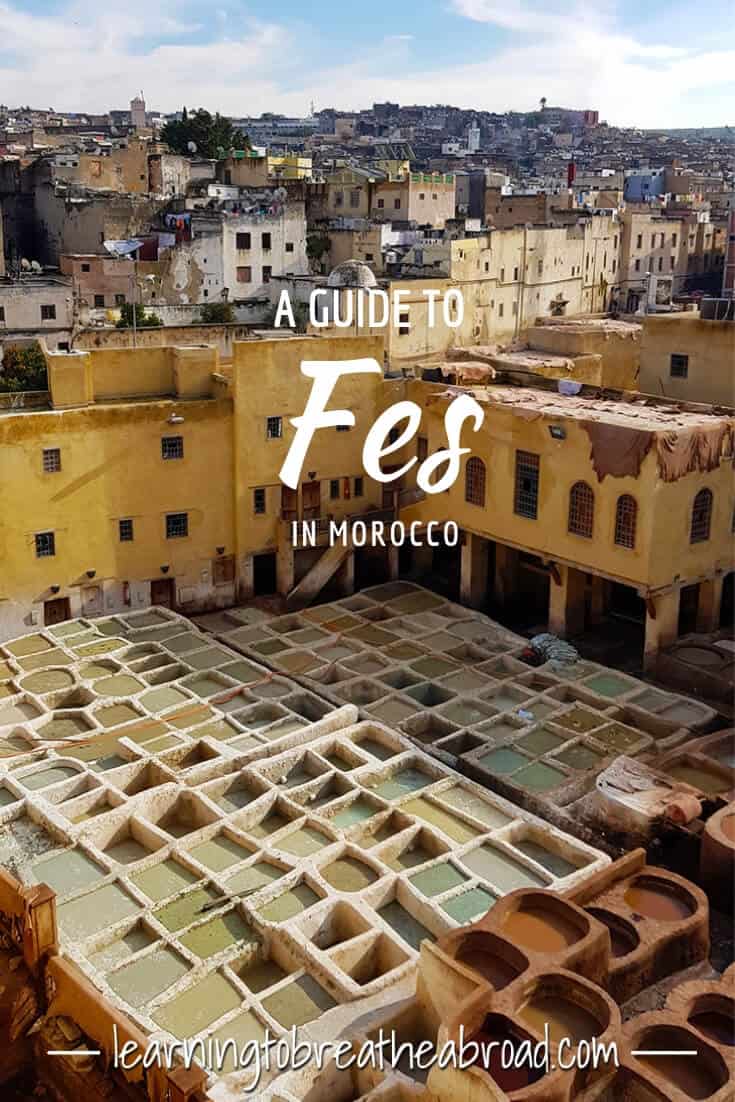