We stumbled upon the town of Merida rather unexpectedly, but it turned out to be one of the best surprises of our trip! The town is brimming with incredibly well preserved ancient Roman Ruins dating back to the 8BC. From aquaducts to amphitheatres and from roman circus’s to theatres, Merida has it all. Everything can be easily accessed in this delightful little town. If you’re planning a trip to Spain, make sure to stop in Merida to see these wonderful Roman Ruins. There is so much to see in do in Merida so make sure to give yourselves at least 2 days to explore. I hope this travel guide will provide all the information you need on Merida, Spain.

We woke to more rain and howling wind, which strengthened our resolve to get further South to warmer weather, as fast as possible. Our route took us along the E80 down the West side of Spain. The road was good, mainly flat and there were no tolls!

I love driving through beautiful landscapes, watching the country stretch into the distance before my eyes, but there was nothing to write home about here. Perhaps it was the gloomy weather and near constant rain that dampened my spirits and reduced my enthusiasm for my surroundings. Or maybe it just wasn’t very beautiful here?

The towns were industrial with factories and high rise apartments blocks. Prosperity doesn’t seem to have reached these parts. At least we were welcomed by the huge “el toro” bulls on the hills as we entered the towns. 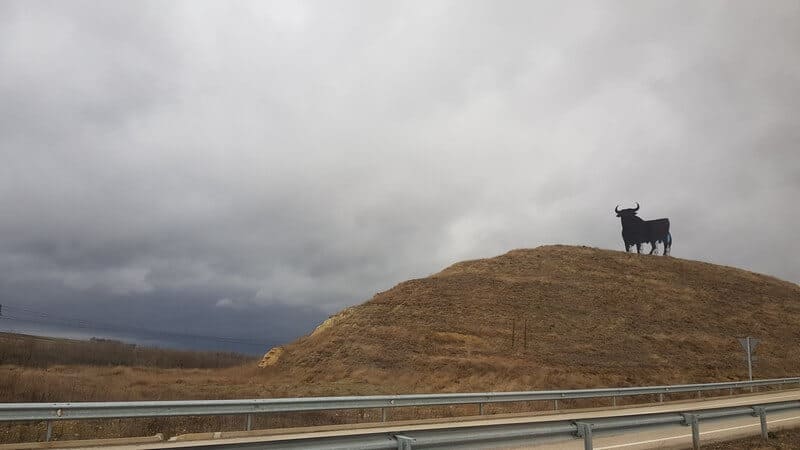 We stopped for diesel around lunchtime in a funny one horse town. Actually, there was a restaurant, 3 houses and a gas station, so probably less than one horse! I sent Tai into the restaurant to see if they had Spanish Tortilla. He came out proudly holding two tinfoil wrapped parcels and grinningly told me he couldn’t understand the lady so he had no idea what was inside! What we had been given was freshly baked baguette filled with big slices of Spanish Potato Tortilla. Tai thought he’d died and gone to heaven it was so good! 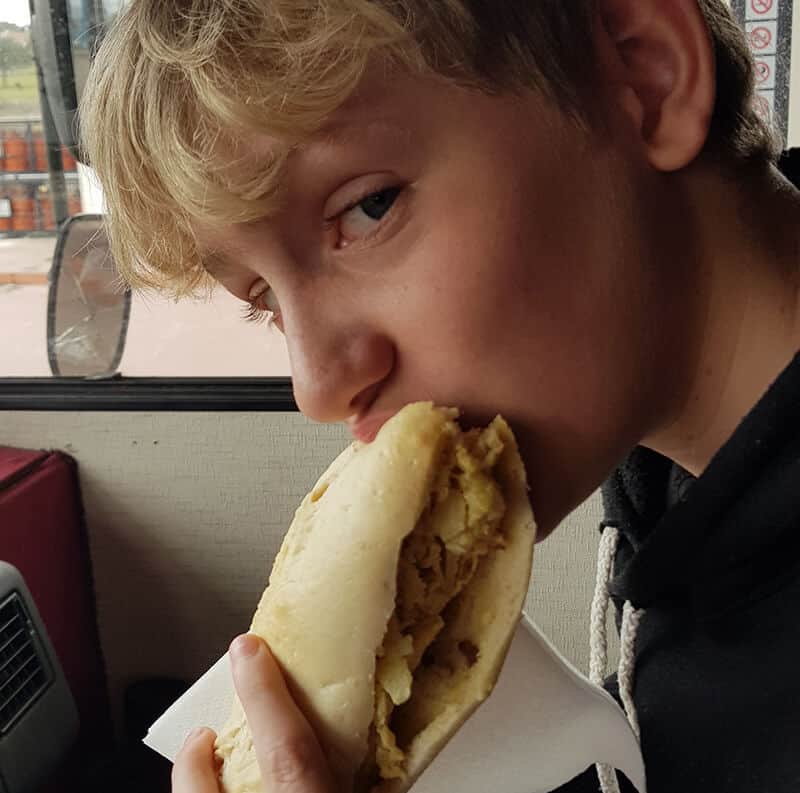 The town of Alaejos

Our campervan stop for the night was in a little town called Alaejos. Entering the town, the skyline was dominated by a magnificent looking cathedral, so I had high hopes for the town, but it was a strange place. All the houses were made of red brick in the exact same style – identical semi-detached townhouses throughout the whole town. And not a single soul on the streets. It was like a ghost town.

We found the campervan spot (N41.181151, W-5,13746), which was new and nice, with electricity and waste disposal and place for about 7 campervans. It was freezing so I sent Tai to the bar at the end of the road to pay for our spot and get a key for electricity. We were quickly hooked up, heater on and supper cooking on the stove. A rather uneventful day, but we were another 400km closer to Morocco!

Leaving the next morning took longer than expected as we couldn’t find a single soul to give the electricity keys to. I sent Tai out on his j-board with the mission of locating a shop or restaurant or anything that was open. Nope, still, a ghost town, so we stuck the keys onto the door of the bar at the end of the road and off we tootled!

You’ll notice that I send Tai out to do lots of the jobs I don’t want to do – lol! It’s important that he shares the workload in some way, so I drive, cook and clean and he sorts out electricity, takes out tables & chairs and fills Miles, our campervan, with water and diesel.

Being on the road for so many hours a day hasn’t been too conducive to work and school, so we have changed things up a little. Tai’s learning about different religions in Social Sciences so he reads the lesson out loud, then we discuss it and he does the online test – all on my phone!! You have to love technology!

Another 333km under the belt for today, still on the E80. We are getting closer and the landscape is getting prettier.

The Town of Merida in Spain

Our overnight stops have been purely determined by the availability of electrical hookup. We are on a mission to get South, not to stop and sightsee, so I hadn’t done any research on the towns we stopped in. Imagine my surprise then when we realized that tonight’s stop was smack bang in the centre of some of the most incredible ancient Roman ruins! The town was Merida and we couldn’t wait to go and explore!

Originally called Emerita, Mérida was founded in 25 BC by emperor Augustus and went on to become one of the most important city in the Roman Empire. Merida has more Roman ruins than any other place on Spain and they are incredibly well preserved. Despite being located only 2 hours North of Seville, there were very few tourists about.

Merida is a small town and although the ruins were spread around, they were all within walking distance. The streets were lined with orange trees, laden with fruit, so we picked and ate as we walked.

Things to Do in Merida 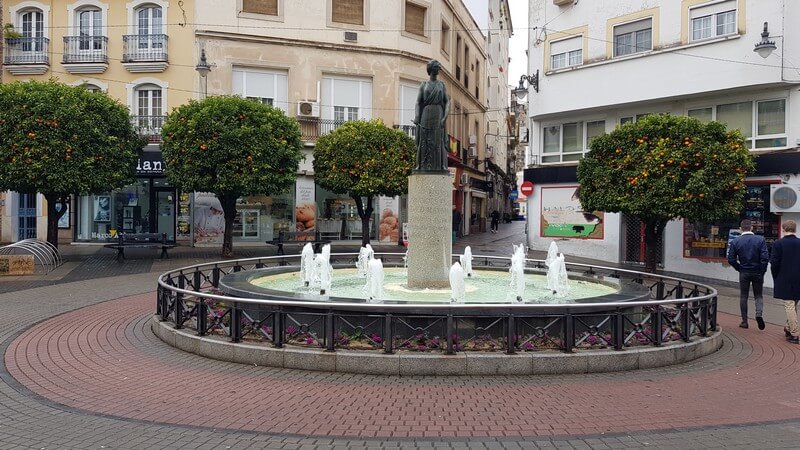 Our first stop was the Los Milagros (“The Miraculous One”) Aqueduct. A series of incredible 27m high arches stretching 800m into the distance. I knew that an aqueduct was a means of moving water but looking at the arches I couldn’t conceive of how that worked. It took a quick Google to understand that there used to be a canal running along the top of the arches. The arches were in a valley, and they were there to keep the very slight gradient of the canal flowing from one side of the valley to the other. In this case, the water was being brought from the Prosperina Dam to the town. 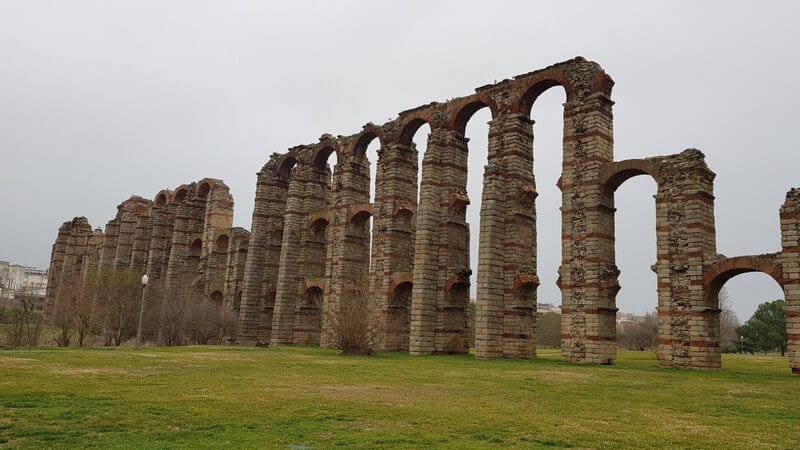 And then the rain came down.. and hard and we ran into town for cover. Finding a supermarket we went in to find a bite to eat. I’ve noticed that all the supermarkets have a large section dedicated to BIO goods – gluten-free, rice and almond milk, etc – a trend that seems to be catching on around the world. Not doing our green bit, we opted for a delicious rack of pork ribs from the hot deli, piping hot and cooked in a sweet sticky sauce. The rain was still bucketing down, so we sat on the floor at the entrance to the supermarket scoffing our ribs like beggars!

The main centre of the town is pedestrianized with little cobbled lanes, charcuterie shops, restaurants and tapas bars. It must be wonderful in summer, but in the cold and wet everything seemed closed and quiet.

The Roman Amphitheatre was magnificent! Built in 8 BC, this colossal arena could accommodate up to 16,000 spectators to watch games of gladiators, hunts with wild beasts and the creation of artificial settings for the duels between man and beast to take place. The pit in the centre of the amphitheater had a wooden platform on top and the inventions necessary for creating the complex shows were installed and hidden here. 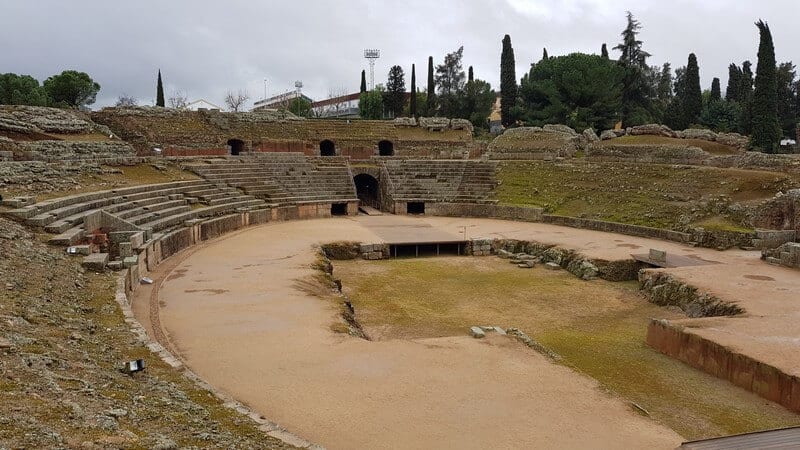 Walking into the Roman Theatre, I couldn’t believe what I was seeing! An ornate 3 storied façade with marble columns and statues. It is incredible to believe that it was built in 15 BC and still looks just as magnificent today. The theatre could hold 6,000 spectators, seated in a three tier system according to social class and rank. Each tier was separated by doors and barriers to ensure that no mixing of the social classes could occur. The entire theatre was decadently built with even the floor of the orchestral pit made of marble. 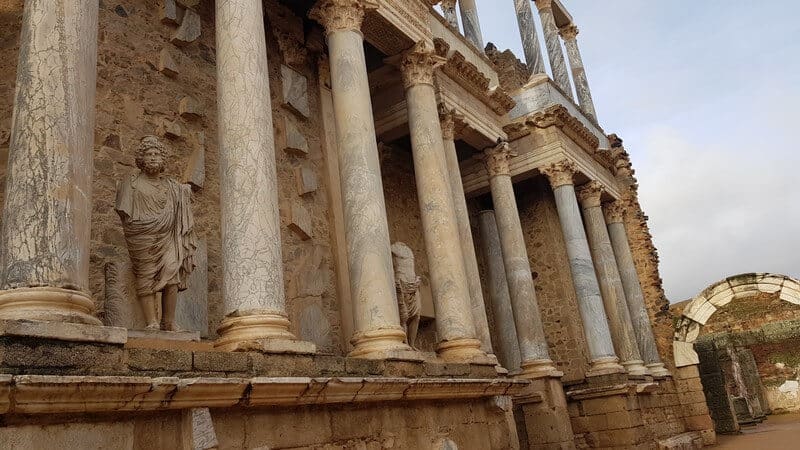 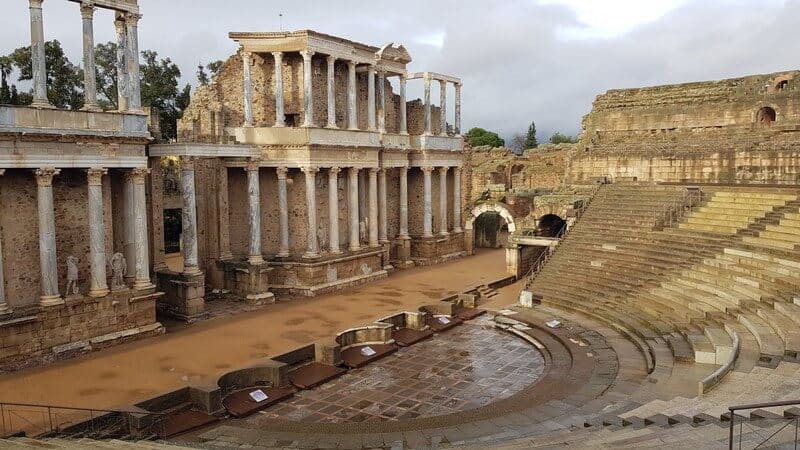 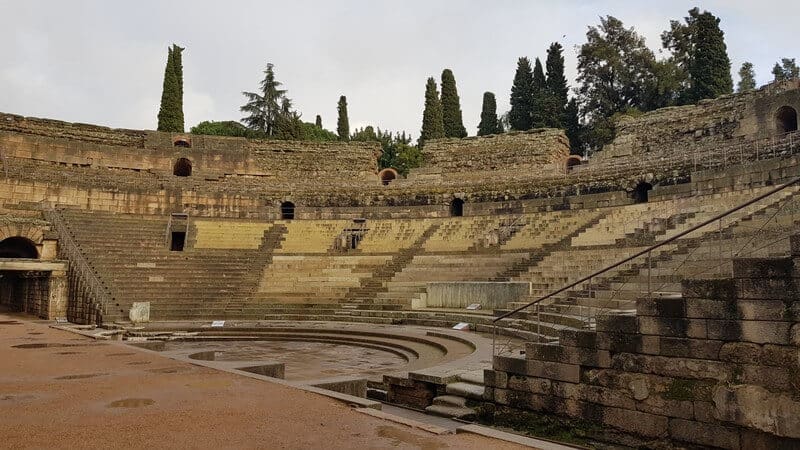 Behind the theatre were immaculately designed gardens with a huge well and a side portico. We climbed up the hill behind for a better view and you can see how beautifully landscaped the whole area is. 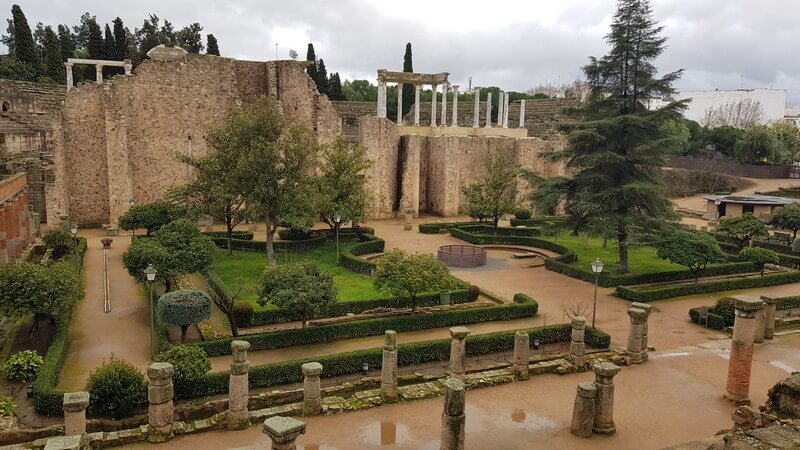 The Roman Circus was enormous! 403m long x 96.5m wide and could seat up to 30 000 spectators! A Roman Circus is where the chariot races are held and in some cases, gladiator fights also take place here. There was a whole story about how the track represented the earth with the wells in the middle representing water and the 12 gates being the months of the year. It was fascinating, but then the rain came pouring down again and sent us scurrying back inside, so I didn’t get to finish reading everything. 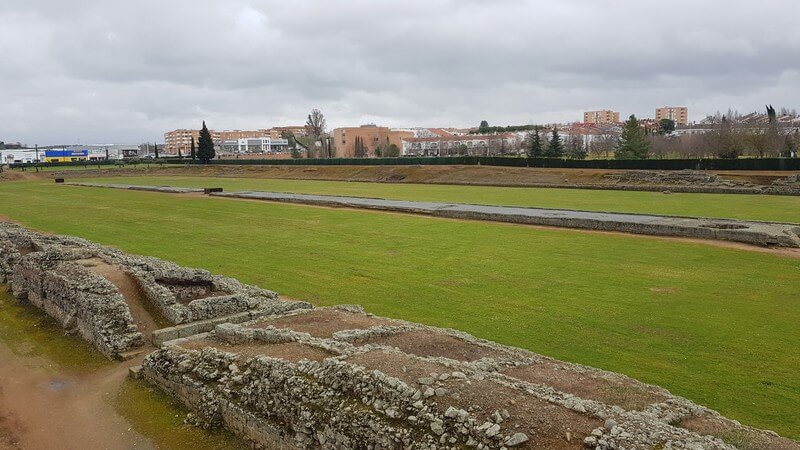 Just across the road from the Roman Circus was the San Lazaro / Rabo de Buey Aqueduct. This aqueduct brought water via a network of channels from underground springs and streams North of the city. It is still completely preserved in most of its stretches and was very impressive. Close by was the remains of the Roman Thermae or Roman Baths. The walls of the pools were still very evident and apparently, there was an underground chamber where fires were lit to heat up the water. 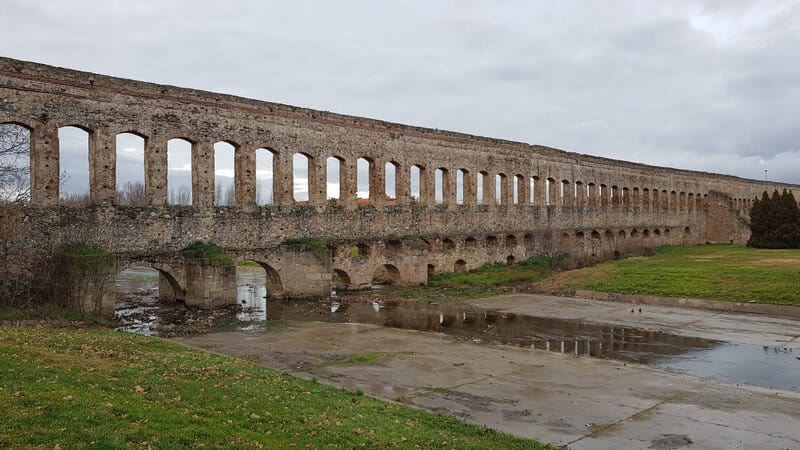 On all of these ancient structures, were huge storks nests and we had seen many storks nests along the road as we drove. Most of these were on metal structures that looked like they had been built especially for the storks to make their nests. Obviously, lots of babies are being delivered in the area! 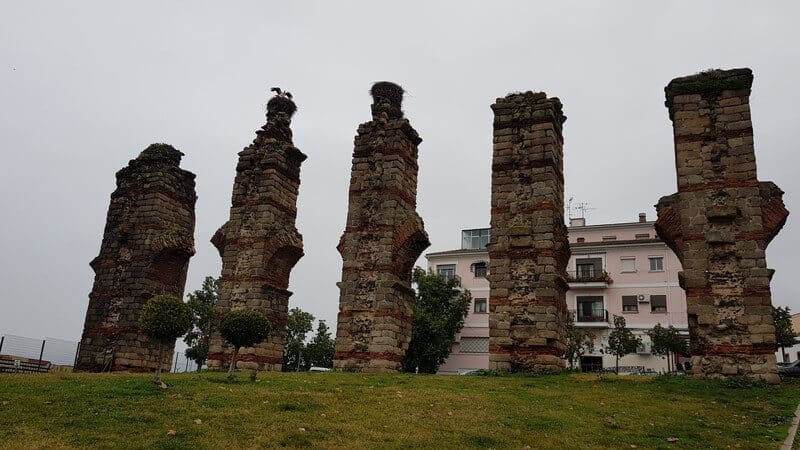 Our campervan stop in Merida (N38.55912, W-6.201104) was actually the visitors parking for visiting the Roman Ruins, but it had all the facilities we needed, so we decided to stay another night and head to Seville in the morning. 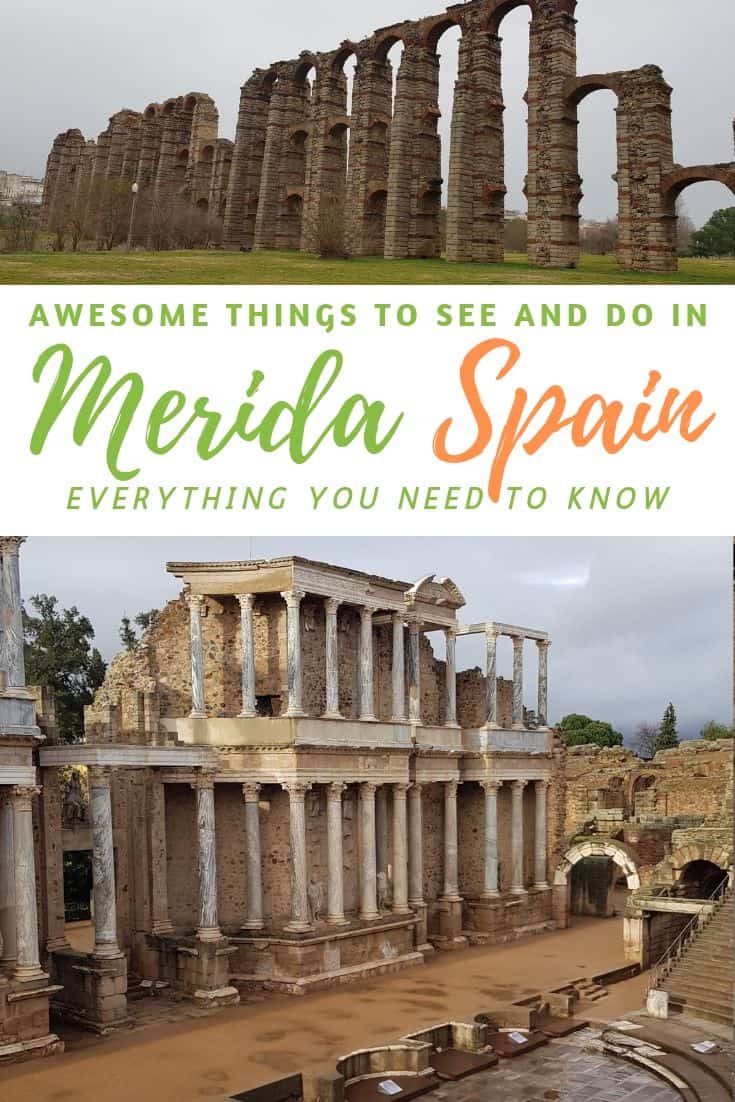