These icy mornings make getting out of bed and getting going rather difficult, so I’m grateful that my travel companions are still happy with what has become our standard 10am departure time. The sun was just dipping into the Ziz Gorge as we set off for another day’s adventure.

Continuing our journey alongside the Ziz Gorge, we passed through a mud-walled village almost hidden by the plethora of palm trees, only the tall minaret from the local mosque peeping out above the fronds. At the end of the gorge, the landscape opened up to reveal the huge Reservoir du barrage Al-Hassan Addakhil. The glittering turquoise of the dam was in stark contrast to the surrounding orange hills, adding yet another stunning image to my memory bank. 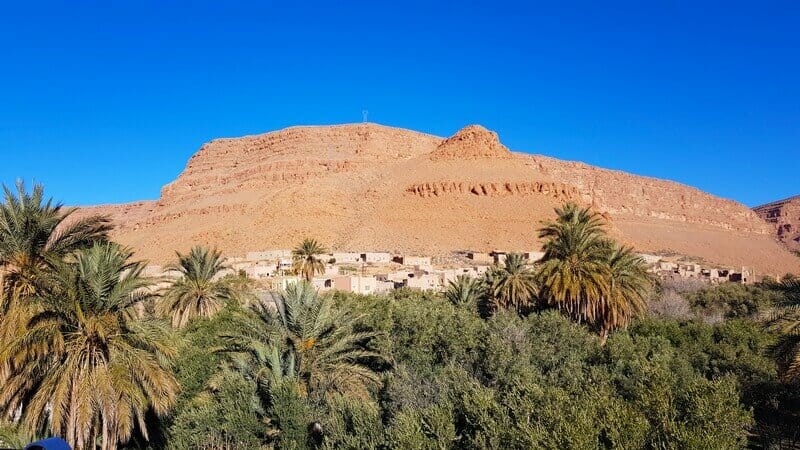 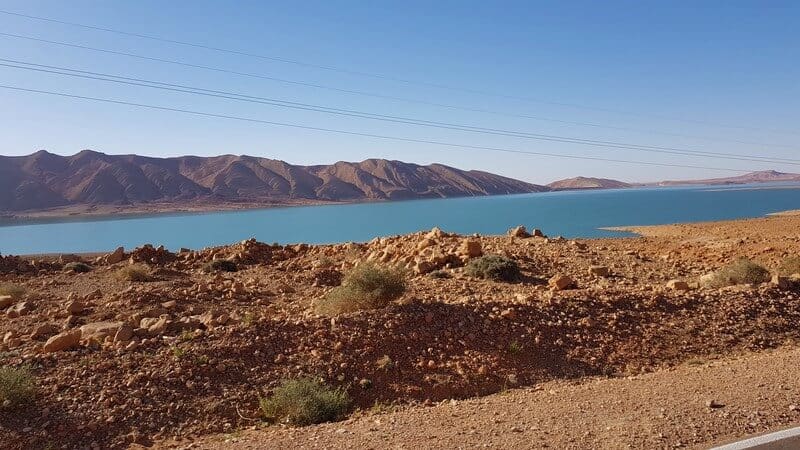 In Errachidia, we stopped to wander around the local souk. A souk is a market where people from the outlying villages bring their produce and wares to be sold on a weekly basis. Mountains of olives greeted us. Green ones, black ones, dried ones, chili ones, tomato relish ones. You name it, in olives they had it! And cheap – I got half a kilogram for 4 Dirhams (€0.40 or R6). A punnet of raspberries was only 8 Dirhams (€0.80 or R11.20). I had been hoping to find local crafts, but besides the food, this market had mostly cheap Chinese clothing and plastic goods which was a bit disappointing.

Outside on the street carts were piled high with tangerines, strawberries, boxes of dates and live chickens. We took a stroll to find the bakery for some freshly baked baguettes and passed by the butchers market where the carcasses of meat were hanging outside each little window. Such a far cry from the sterile refrigerated environment us Westerners have come to expect for our meat. And yet, we have not once been ill from eating the meat in our tagines. 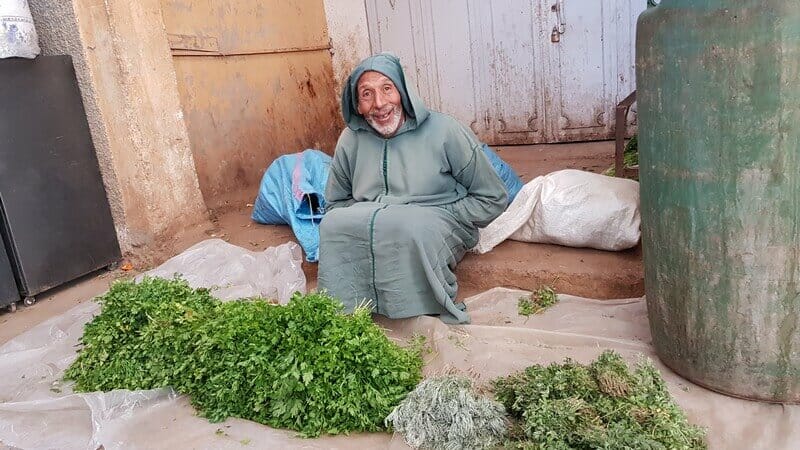 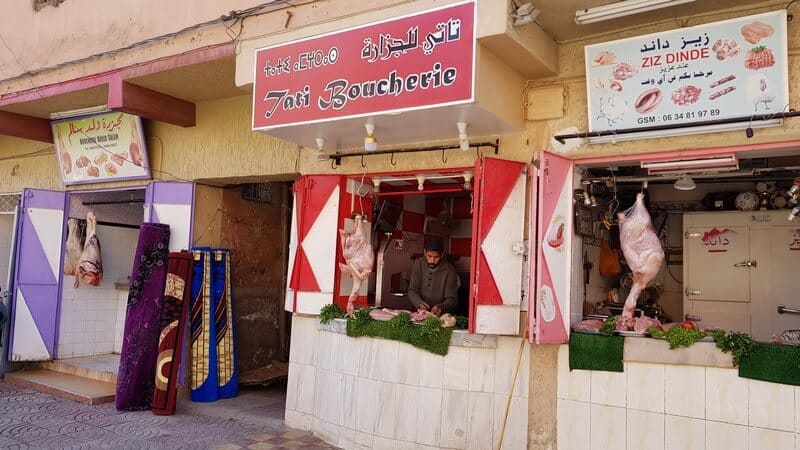 Not far from Errachidia, we took a turn down a dirt road into the village of Meski. An oasis was on the agenda, our first one in fact. Within seconds of our arrival at the Blue Eye, we had Mohammid offering his services as a tour guide. We tried to brush him off, but after much persistence, Jean-Francois handed him some Dirhams and the tour began. There is not much of the original spring left, as the whole area has been paved with a magnificent swimming pool, containing the spring water, in the centre. The “upgrades” were done by legionnaires under the French Protectorate.

Legend has it that bathing in the springs makes you more fertile and Mohammid explained that if a woman wanted a husband, then she would put some black soot from the cave walls on her face and she would then get a husband! Easy as that! Tinder has nothing on these guys!!

We had a humorous few moments when Mohammed told me that no one would give so much as one camel for me because I was too thin. Apparently, the Moroccan men like their woman on the rounder side, especially those living in the desert. The reason being that it is hot in the desert and the bigger a woman is, the more shade she can provide for her man!

A flight of stairs led us up to a lookout point from which we had a clear view across the palm fronds of the palm grove and on up the hill to the old Kasbah. Now derelict, the crumbling mud walls stood baking in the sun, a reminder of life in another time.

The tour now over, we were invited to drink mint tea with Mohammed, guess where… Yes, in his shop! Filled to the brim with carpets, djellabas, teapots and pottery tagines. We accepted the sweet tea, which Mohammed called Berber Viagra! It was hot and delicious, and we were grateful, but we still didn’t want to buy anything. Sorry, Mohammed! 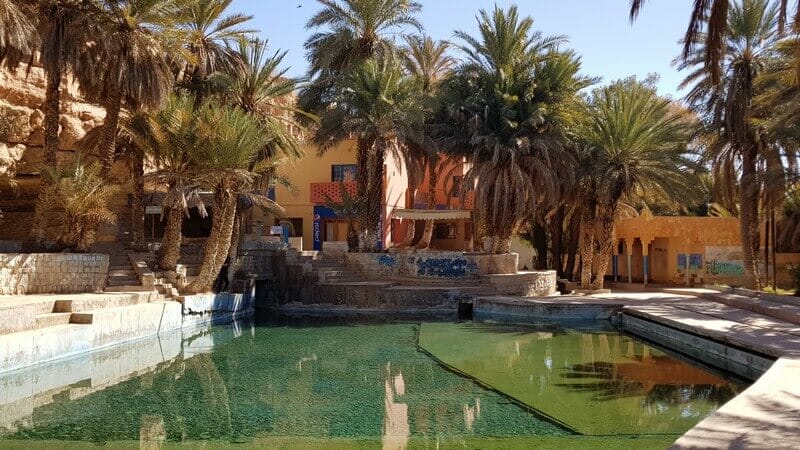 There is a campsite amongst the palm trees, right next to the Blue Eye Spring. It looked beautiful and peaceful, but we had more ground to cover still today.

From Merski, the road went up, up, up until we were on top of a plateau. The landscape changed once again. Hues of pinks and peaches stretching as far as the eye could see. Flat without a hill in sight. The ground was sandy and rocky and dotted here and there with pops of small green shrubs. The colours and textures of this country are breathtaking and our photos do no justice to the immensity of it all. 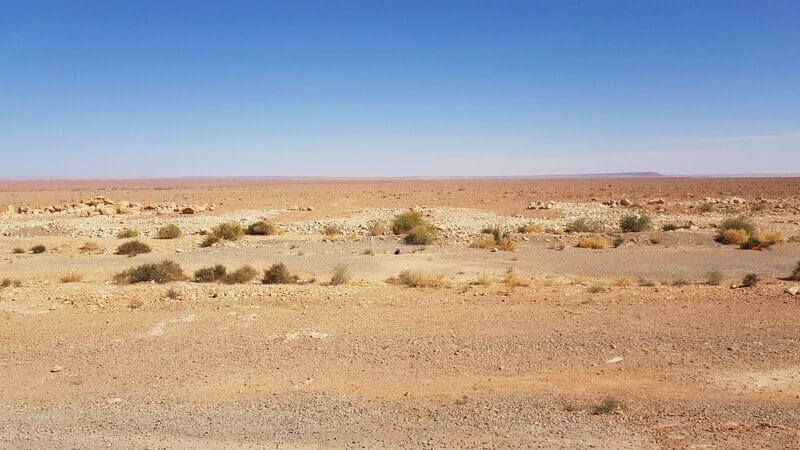 Just before the town of Aoufous, we stopped at what the sign stated was a “panoramic viewpoint” (31.789895, -4.23905). The earth was rocky and barren and we could see there was a gorge in front of us, but never in my wildest dreams could I have imagined what I was about to see. Thousands and thousands and thousands of palm trees snaking their way along the bottom of the gorge. For as far as the eye could see in either direction, were palm trees, making it look like a huge green river flowing below. Following the bends of the gorge, red mud walls of villages appeared every now and again beside the palms with rectangular patches of crops irrigated by the Ziz River flowing underneath. This is the largest palm grove in all of Morocco and it is a truly spectacular sight. 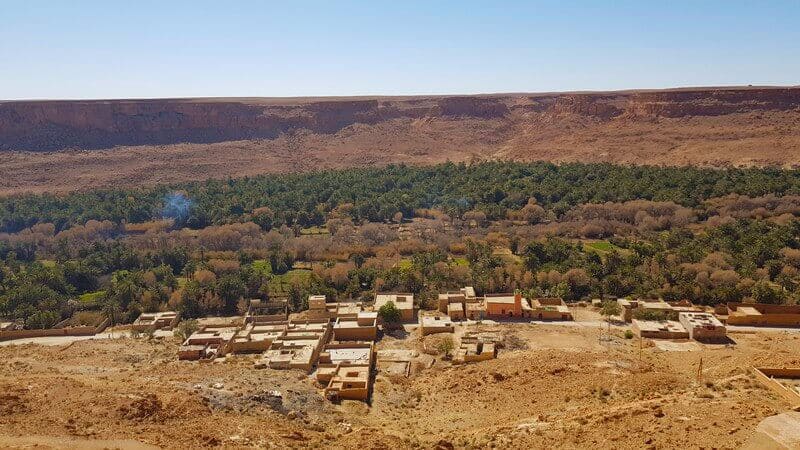 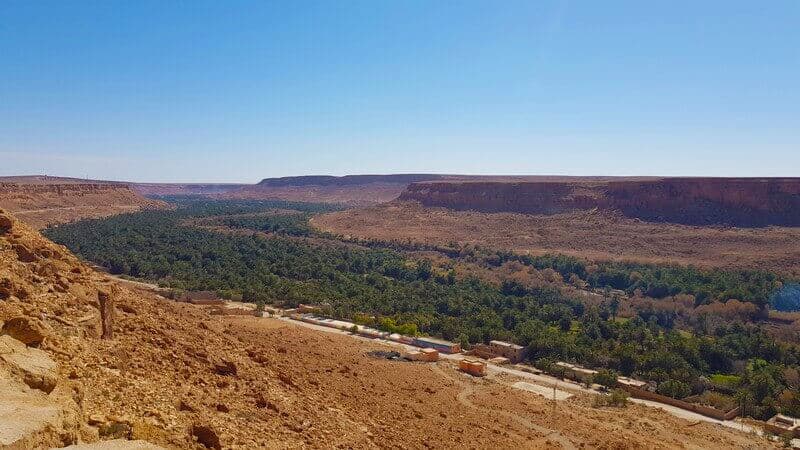 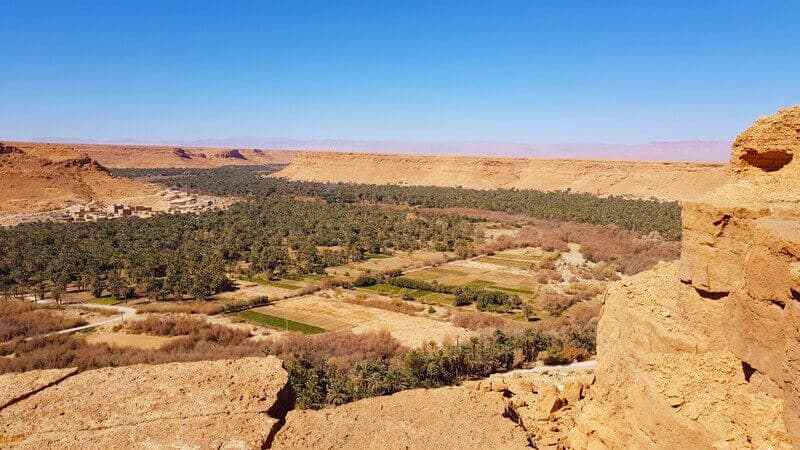 Back on the road, we dipped down from the plateau into the gorge, travelling past the towns and alongside the palms. We drove through the town of Erfoud with its high mud walls and heavily laden donkeys carrying crops back into town. We have noticed that the men always ride the donkeys, while the women always walk alongside the donkeys. I am yet to figure out if this is a cultural thing or if the women just feel sorry for the donkeys or perhaps it’s that the women just can’t get up onto the donkeys? They are a little fuller in the figure so maybe not able to jump up into the saddle?

The town of Rissani greeted us with a magnificent arched city gate through which we squeezed, hoping not to clip Miles, our campervans side mirrors. I then watched a huge truck barely even slowing down as he barreled his way through the narrow gap!

Rissani looks like a modern town with the stock standard 3 story, square cinderblock style houses lining each side of a poorly maintained road. Definitely, nothing here to hold our attention so out we zoomed, destination, the desert!!

It wasn’t long before we saw the first orange sand dune on the horizon and the excitement started setting in. The road was long and dead straight, so we all cranked up the speed to a whopping 85km/h and blazed a trail straight to the dunes. Merzouga, you look beautiful and we can’t wait to explore you more!

Some more photos from the day: