By far, the most popular thing to do in Kotor is to hiking the Kotor City Walls up to St John’s Fortress. The views from up here are absolutely spectacular and well worth every ounce of effort. We hiked up via the City Walls and hiked down via the Ladder of Kotor.

Only 1350 stairs up to the top where the fortress sits at an altitude of 260m. This is not called the “Huff and Puff Trail” for nothing!

From the main square in the old town, we meandered on cobbled streets, through tunnels, past cafe-strewn squares and laundry fluttering from wrought-iron balconies until we reached a set of stairs with a ticket office at the top. This was the path closest to the city’s South Gate, but you can also start near the North Gate. We paid the €4 each entrance and started our ascent.

You can either choose to walk up the steps or walk on the rocky path. Even in trainers, the path was not easy as the rocks were loose and uneven. Bizarrely enough, not one single person walking down, stepped off the stairs to let us pass, so we kept having to step off onto the gravel path.

The fortified walls were started in the 9th Century with the full loop only being completed in the 15th Century. The walls are not always easy to see against the backdrop of the craggy mountains, but when they are lit up at night, you can see the full loop in all its magical glory.

In Summer it is best to hike early in the morning, but we had school and work to deal with first so only hit the slopes at midday. It was super hot but still manageable. We had taken lots of water, but there are vendors all the way up, selling water and cooldrinks, should you need. I would imagine that in winter months the vendors won’t be there so bear that in mind if you are there out of season.

After about 20minutes, we reached the first landmark, the Church of Our Lady of Remedy and already the view over the red roofs of the city was stunning, but better views were still to come. So onwards we went.

Next was the ruins of a military building with crumbling walls and shortly thereafter there was a battered yellow signpost pointing left to a hole in the wall. We are going to go there soon, but for now, the fortress at the tops awaits.

The higher we got the more breathtaking the views. The water in the Bay of Kotor with its turquoise hues and the tiny little red roofs of Kotor, far below.

The Montenegrin flag was proudly flying atop St John’s Fortress and there were many passages, rooms and nooks and crannies to be explored. Tai found 3 little kittens and I’m not sure who entertained who more, but they all played for ages.

Back down the path, we went and at the yellow sign, we turned right and climbed right through the hole in the wall. Below us was a green valley with a path leading to St George’s church. It was looking rather dilapidated but the frescos on the walls and ceilings were still visible, although rather faded. It was peaceful in the valley and not another soul around, despite being only a few minutes away from the masses on the city walls.

Hiking the Ladder of Kotor

Instead of following the path left and back up the hill to the hole in the wall, we decided to take the path to the right and go down via the “Ladder of Kotor“. This old caravan trail connected Cetinje with Kotor and was used by local women taking their goods to the market in the Kotor Old Town. We passed a large herd of goats which Tai tried to chase until one with huge horns advanced towards Tai, causing him to squeal and run away as fast as possible – so funny!

About 3 minutes from the church, we came across a restaurant, with incredible views over the bay and the Ladder of Kotor. There was a sign showing that goats cheese, honey and rakija were on sale which could have made for an interesting stop. We were given a hearty greeting by the elderly lady at the restaurant and stopped to watch her feed about 12 cats!

We continued down the endless switchbacks, enjoying the gentle slope guiding us gently back down to the city. There had been lots of people hiking the walls, but we had the Ladder of Kotor virtually to ourselves, which was wonderful. There were a few trees offering shade and ample spots to stop and marvel at the view, but you’ll need to bring your own refreshments for this stretch as there were no vendors here.

The trail ended a few meters from the bridge at the North Gate, so bringing us back full circle. The whole hike took us 4 hours, but we stopped lots of photos, exploring and playing with cats, of course!

Other Hikes near Kotor

Montenegro is such a beautiful country and there are numerous hikes you can do throughout the country. Across the Bay from Kotor is the Vrmac Peninsula, which has a very easy, family friendly hike along the Vrmac Ridge. The Durmitor National Park has the most breathtaking scenery and here you can hike to the highest peak in the country, Bobotov Kuk. Close to Durmitor National Park is another family friendly hike around the Black Lake in the town of Zabljak. In the mountains high above Kotor is the Lovcen National Park which also offers numerous spectacular hikes. Access to Lovcen is easiest on the road from Budva and not directly from Kotor.

Wherever you choose to hike, Montenegro will not disappoint and you will richly rewarded with incredible views.

You May Also Like These Montenegro Travel Blog Posts

Let Us Know: Have you hiked in Kotor, Montenegro? What was your best hike? Tell us in the comments! 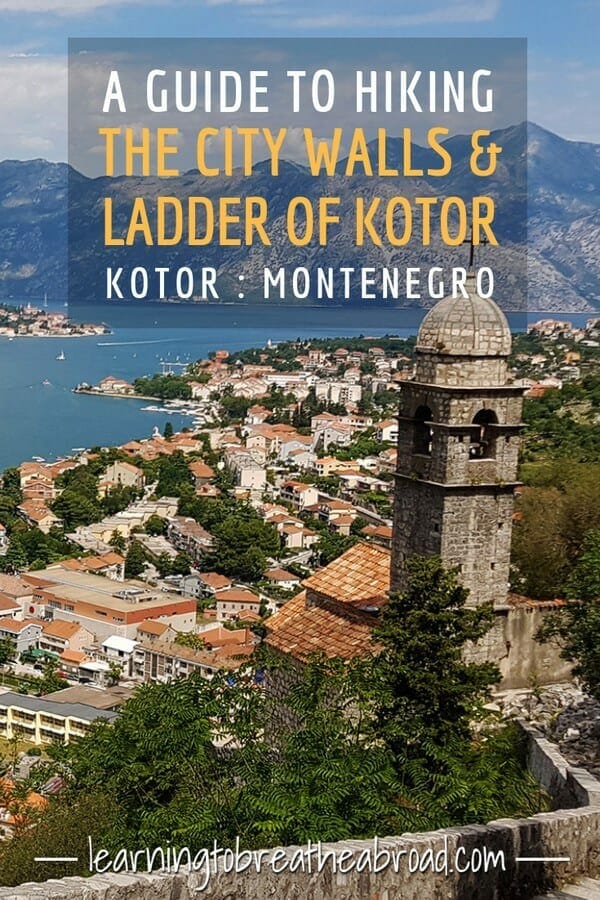 13 Stunning Places to Visit in Montenegro: The Most Beautiful Country

The Ultimate Montenegro Travel Guide: Everything You Need To Know