While waiting to do our boat tour to the Uvac River Meanders, we had met a Dutch couple who had managed to find the elusive Camp Uvac we’d been searching for the day before. They couldn’t rave more about it so after our boat tour, we decided to give finding it another try.

We headed up to the little village of Akmacici. A few minutes into the trip the heavens opened and within seconds the dirt road became a river, so I pulled over at a lone bar and wandered in to ask for directions and to wait out the deluge.

There were only three people inside, a 40 something lady who clearly ran the show, a loud drunk man and an elderly lady that epitomized the concept of an old Yugoslavian woman. Dressed from head to toe in black from her stockings to the scarf on her head. She had the most piercing blue eyes, a large hook nose and a mole strategically placed on her chin. Add a basket and an apple and she could have been Snow White’s witch.

None of them could speak English but through Google translate and a phone call to a woman who could speak English, I managed to convey my request and was told to sit tight as the owner of the campsite would come and collect us. The phone was then passed to me again and the English speaking woman on the other side told me that the gentleman beside me thought I was very pretty and he liked me very much. Just what I needed! A drunk  Serbian mechanic, missing a few teeth and no ability to converse with me in English. I don’t think so!

By this stage, two more men had arrived and they were getting more and more insistent that I have a drink and a smoke. It didn’t matter how many times I said no, they kept at it, eventually even going as far as pouring me a glass and putting it in front of me. I had a lingering cough from a bout of flu and the air of thick smoke was causing me to cough even more, so I used it as an excuse and dashed outside. I’d rather wait in the rain thanks!

The campsite owner eventually arrived and off we set, him at a breakneck pace that I could never begin to match on these dirt roads. Thankfully he stopped to buy cigarettes so we managed to catch up. Then he was off again.

He took us down a road that no campervan should travel on. A muddy gravel track that dipped down and then went up the other side at about a 30-degree angle. I had no choice but to absolutely floor it! Wheels spinning and skidding we managed to make it to the top of the hill, but I was rather shaken and terrified of the descent on our leave.

The Dutch couple was there in their compact VW combi. No wonder they had no problems!

At least we didn’t have to cook as the owner’s Mother-in-law had prepared us a meal. Or should I say a feast! A delicious broth, pickled cabbage, Shopska salad (tomato, cucumber, and onion), fried potatoes, homemade feta cheese, crumbed lamb chops and little pastry fingers filled with mince. It really was delicious!

Despite the trials of getting here, I could see why the Dutch couple had raved. The scenery was magnificent. The “campsite” was literally just parking on the field next to the farmhouse, but it was right on top of a hill with gorgeous views down into the valley and surrounding hills. We could even see a corner of the Uvac River down below. Spring flowers added patches of colour everywhere and all you could hear was the quiet buzzing of bees and the tinkling of cowbells.

Going back down the hill was just as scary, as the gravel was super slippery under our braking tires, but we made it in one piece.

We stayed at Camping Uvac. It is a local family’s farm and they provide electricity and bathrooms. They will also cook you up a serious feast for 10Euros. It costs 7 Euro per person per night.
If you’re in a small camper then this would be fine, but I really don’t recommend big campervans try getting here.
To get here, first go to the town of Akmacici. The road to the farm can be found on the left as you leave Akmacici going towards Novi Varos.
GPS: 43.4056, 19.90472 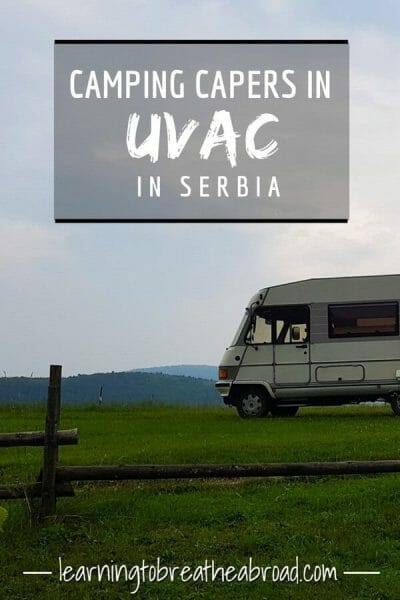 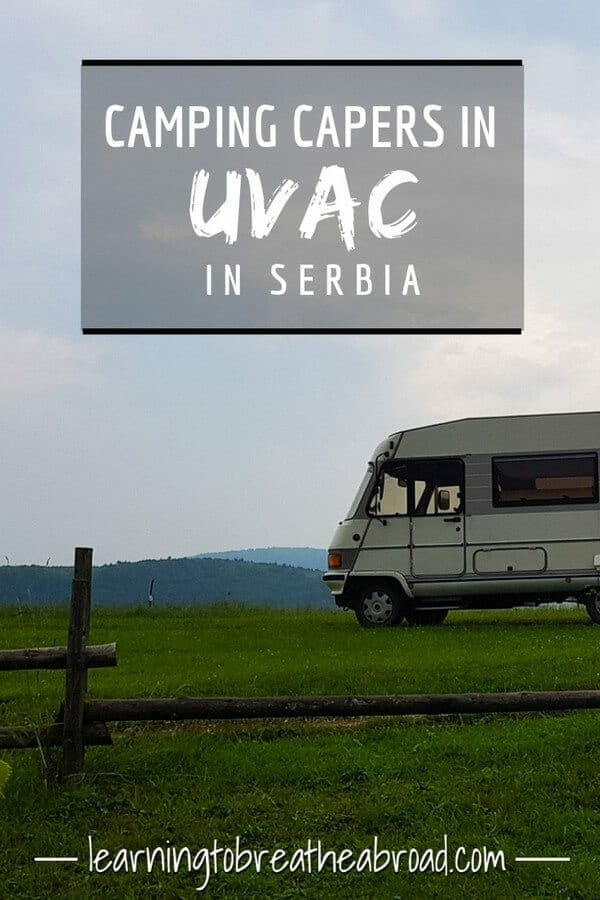