We left Cape Town at a scorching 36° and arrived in Amsterdam at 0°. Oh my word was that a shock to the system! It had snowed the day before and everything was covered in a pristine white blanket. It looked like a picture postcard winter wonderland. For my African child, who’s first ever sighting of snow was in Slovenia the previous year, this was absolutely magical! 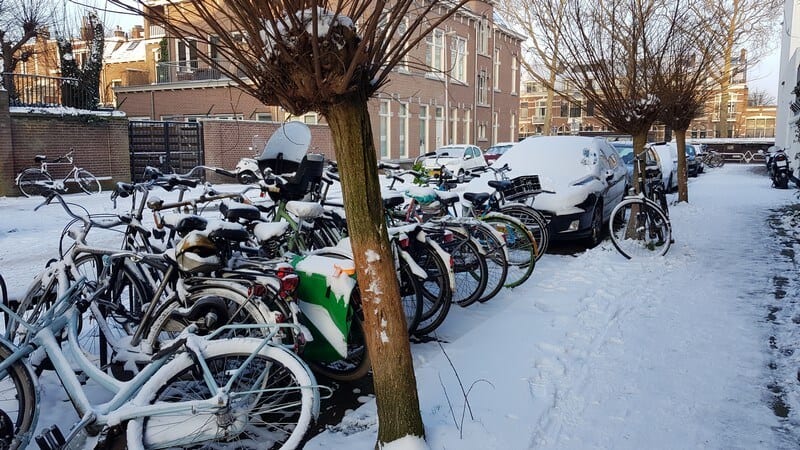 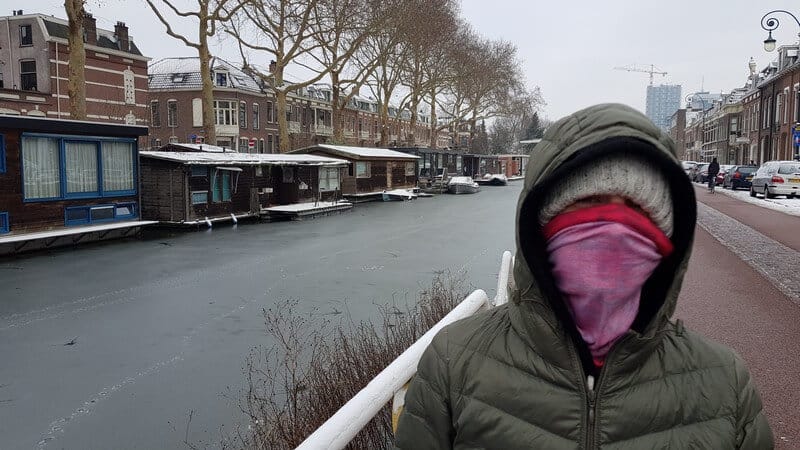 We hopped on a train down to Utrecht where we would be collecting Miles McFlattery, our campervan. Within a few minutes of opening the door, our bags were unpacked. Not such a mean feat as we travel light and there isn’t much space in Miles. Sadly, my worst fears were confirmed. The campervans gas heater, that I’d had fixed in Belgrade in Serbia, was no longer working. So off we set to a mechanic, with a little detour to buy a small electric heater, just in case.

The mechanic worked on the heater for an hour before stating he couldn’t fix it and we would need a brand new heater at €200 plus labour. He was already charging us €74 for time spent, so I decided to quit while I was ahead and try and get it fixed in Spain or Morocco. While he was busy working on Miles, Tai had found some kids sledding on a little hill nearby, so he joined them for a bit of excitement, in between eating copious amounts of snow!

I only had summer tyres on Miles and some of the roads were completely iced over, so we took things really slow, which gave us time to stare at the little villages, all magically covered in white. Once we hit the highway, I put foot until we were cruising at the breakneck speed of 85km/h! Yip – that’s Miles’ limit. Any faster and I might as well make a huge hole in the gas tank and let the diesel free flow.

We got just to the outskirts of Antwerp before it got dark and found a campervan stop (N51.17564, E4.30135) with electricity. It was just a parking lot really but at least we could put our little blow heater on to keep toasty. There was a swimming pool complex next door so we went to use their super warm bathrooms. 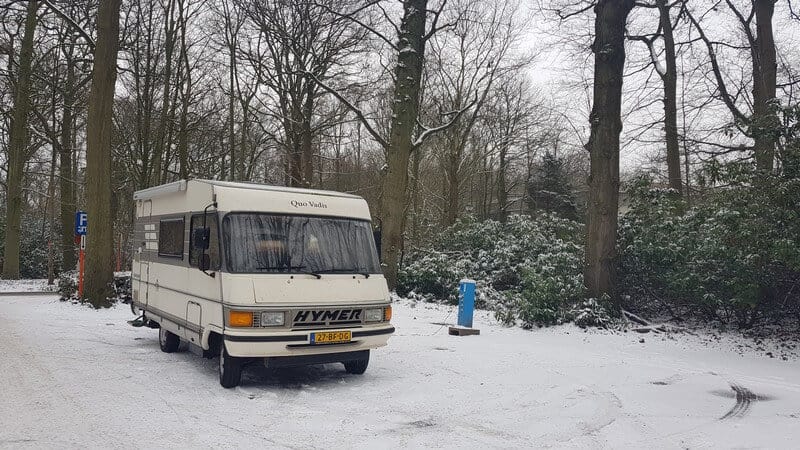 My word was it cold the next morning! We had ice on the INSIDE of the windscreen! Heaters on, a few large cups of coffee and we were off again. The destination, Paris!

And what a stunning drive it was with field after field of white snow, snow-laden trees and white-roofed houses. The cars driving past had thick snow on the roofs that broke off in chunks as the drove, smashing into a million pieces as it hit the tarmac. It might have been cold, but it was beautiful and we were oh so happy!

We stopped at a gas station for a bite to eat and Tai got his first taste of a croque monsieur or French toasted cheese sandwich. It was cheesy and greasy and we were both in heaven!

I had found a brilliant wild camping spot, just a 5 minute walk from the Eiffel Tower, but with the gas heater not working we would need electricity so were forced into a campsite – Camping de Paris. €36 per night! Oh well! The campsite was in the Bois de Bologne forest, so a lovely setting and we could easily catch the bus into the centre of town.

Needing some supplies, we bundled up and crossed the bridge over the Seine to the suburb of Suresnes. It was a pretty neighborhood with quaint shops and funky looking cafes. We found what looked like the town hall lit up with changing multicoloured lights. It was quite bizarre in this old European style town. We quickly located a boulangerie, grabbed a few baguettes and headed back to Miles. Crossing the bridge again, we could see the Eiffel Tower all lit up and twinkling in the night’s sky. Tai’s excitement was contagious. He’s been wanting to see the Eiffel Tower since I went to Paris when he was 5 years old. His dream was almost about to come true! 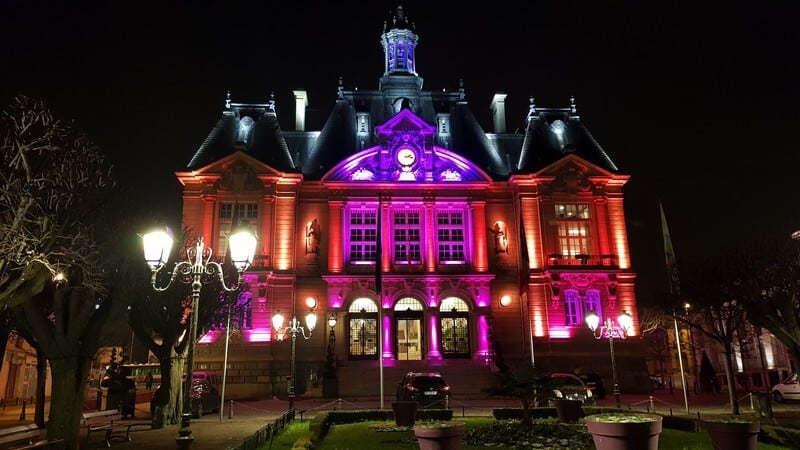 At a rather chilly 1°, just breathing out made a huge puff of “smoke”. Tai loved this, pretending to puff away on an imaginary cigarette. Duly bundled in wooly hats, scarves and big coats, we set off for a day of seeing the iconic sights of Paris. 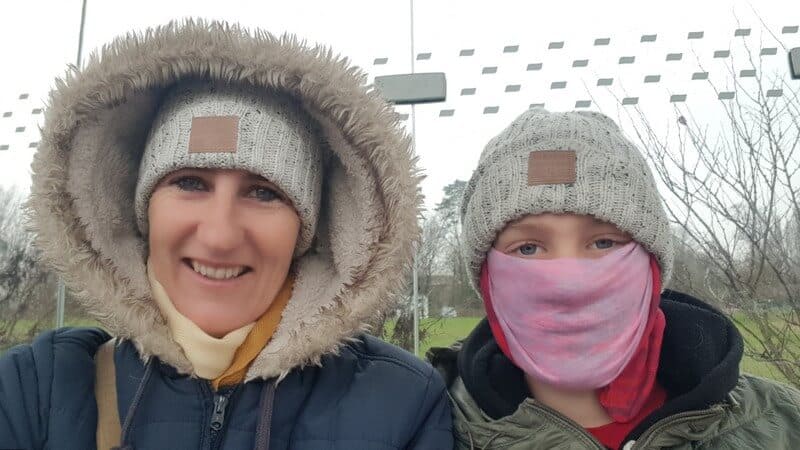 One day is definitely not nearly enough in Paris but we tried our best. We stood in the middle of the Champs Elysee to take photos of the Arc de Triomphe, fed pigeons at the Trocadero, got educated on betting with the 3 cups and a ball scam and were wowed by the sheer size of the Eiffel Tower. We wandered along the Seine and found ourselves amongst some seriously high-end shops below the Louvre  – we were definitely not their target market so we skedaddled as fast as we could! We watched the Instagrammers posing EVERYWHERE! Jackets off despite the cold, with poor boyfriends, furiously clicking away, all just to get that one epic photo. They do make us giggle every time! 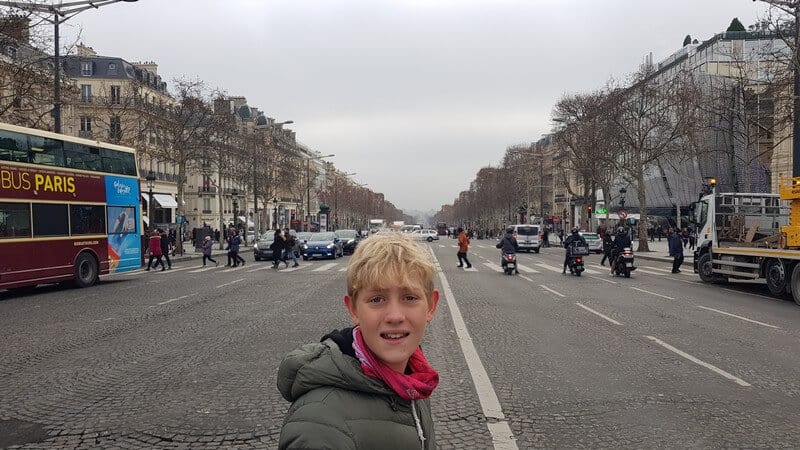 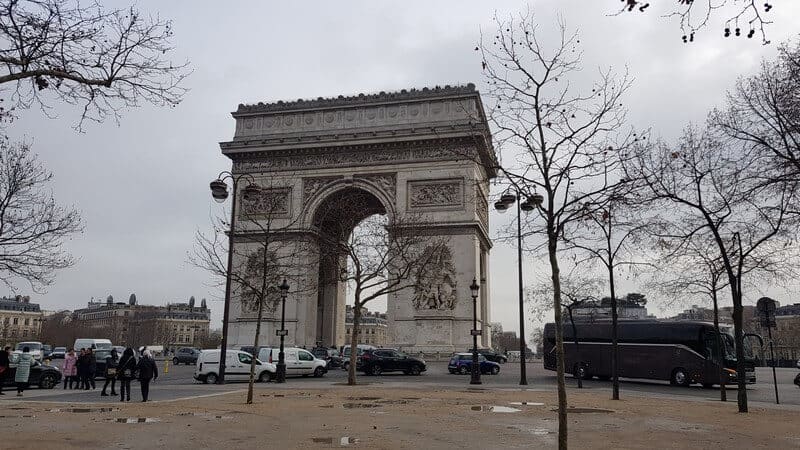 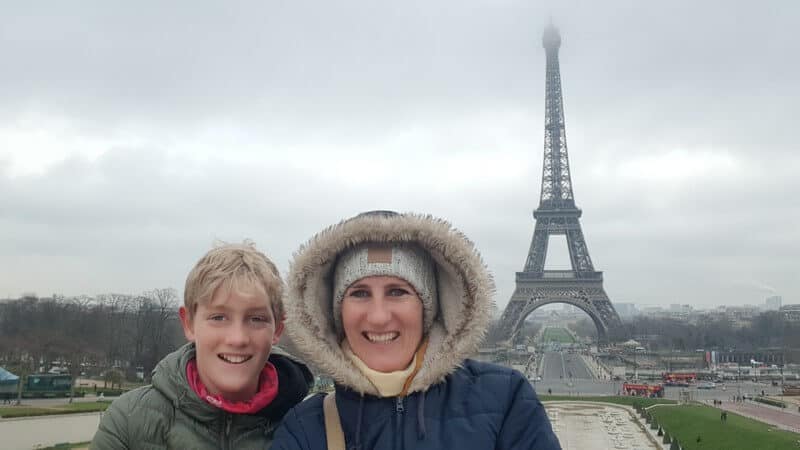 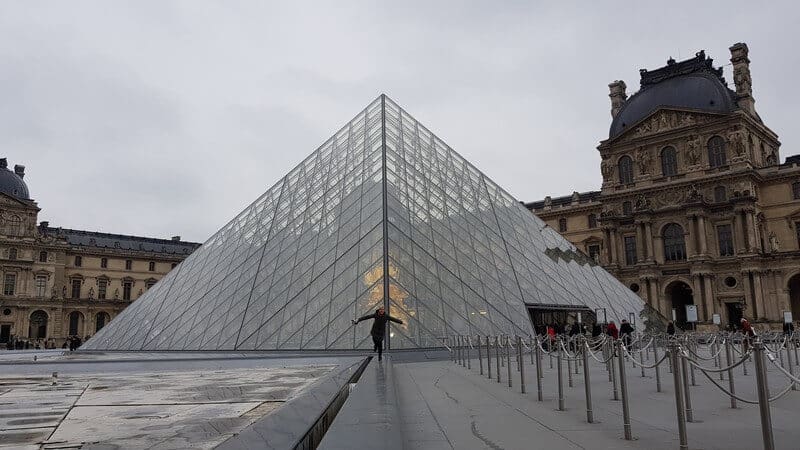 We rode the metro here and there, caught buses when we could and beat the pavements with our tired feet. It was thrilling and exhausting all at the same time.

In the Tuileries Garden, we found some chairs at a central pond and sat watching the ducks and the world wandering past. The gardens are so beautiful and reminded me of a previous trip to Paris, in summer, where we lazed in the gardens drinking French champagne and feeling very debonair.

We had a hilarious moment trying to make Tai jump for a photo. Turns out this white boy can’t jump – lol!!! 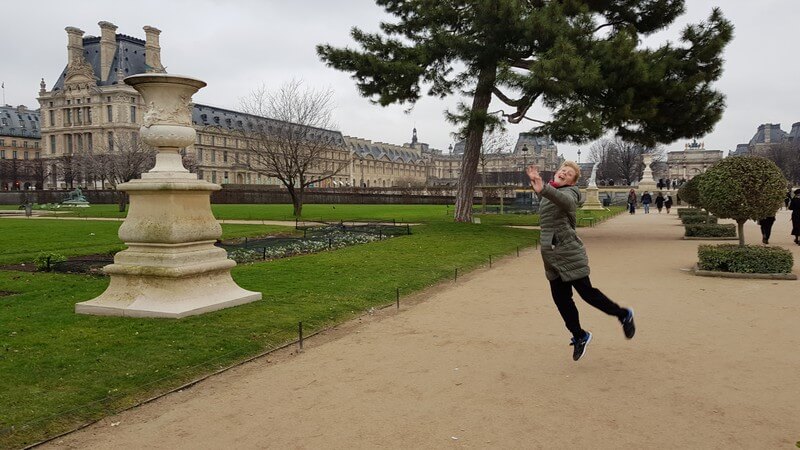 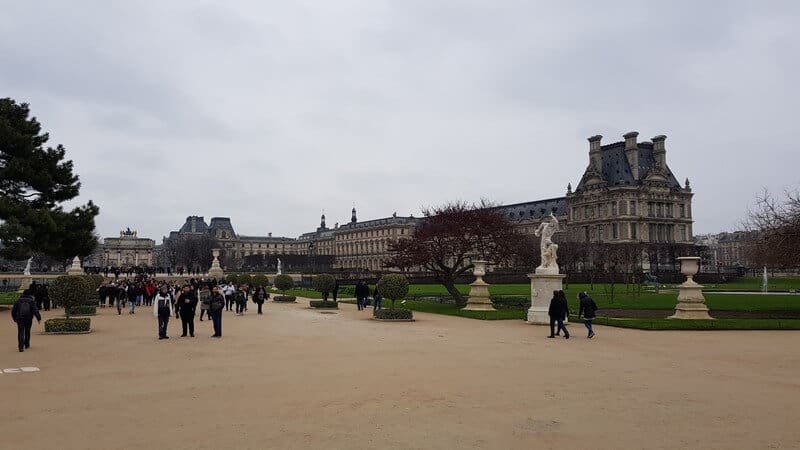 In April 2017, while in Myanmar, we had met a single mom and her son in a tiny town called Hpa-an. Julie and I have remained in contact ever since and when she heard we were coming to Paris she said we had to pop in. So off we headed to her apartment in the Montmartre area for a wonderful reunion and catch up. She has a passion for traveling just like me and we spent our time together discussing all the places we’ve been and where we still want to go, as well as the trials and tribulations of being single moms to crazy boys. It was a fabulous evening and perhaps we’ll get a chance to do it again on our way back? 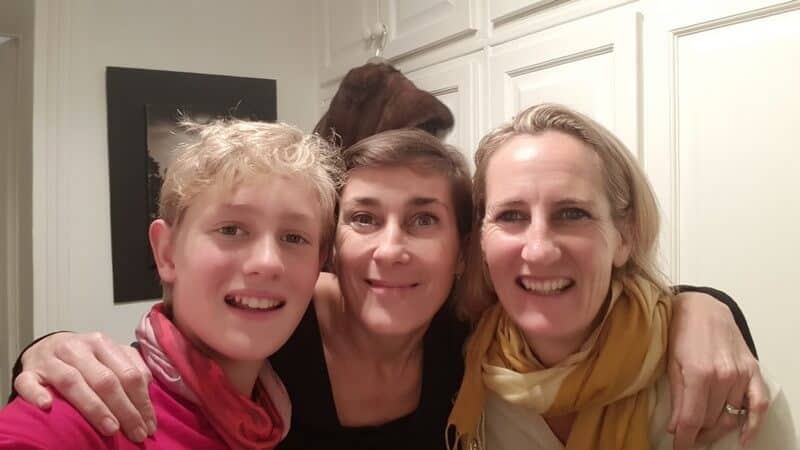 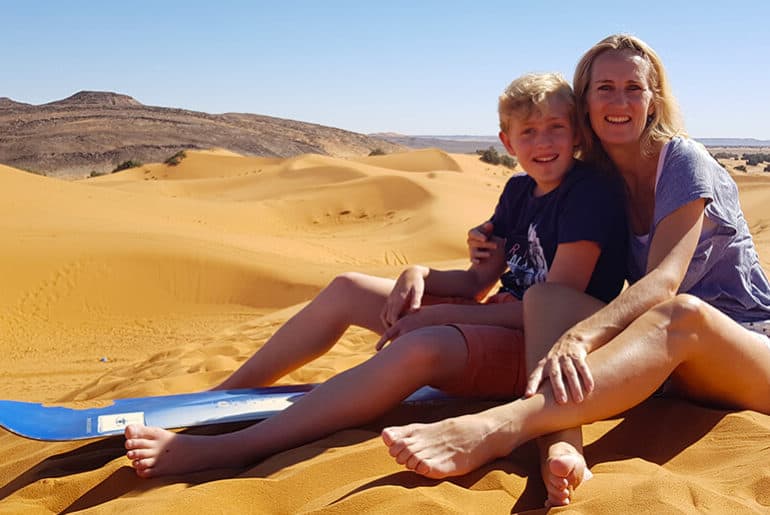 Camels & Sandboarding in Merzouga in Morocco 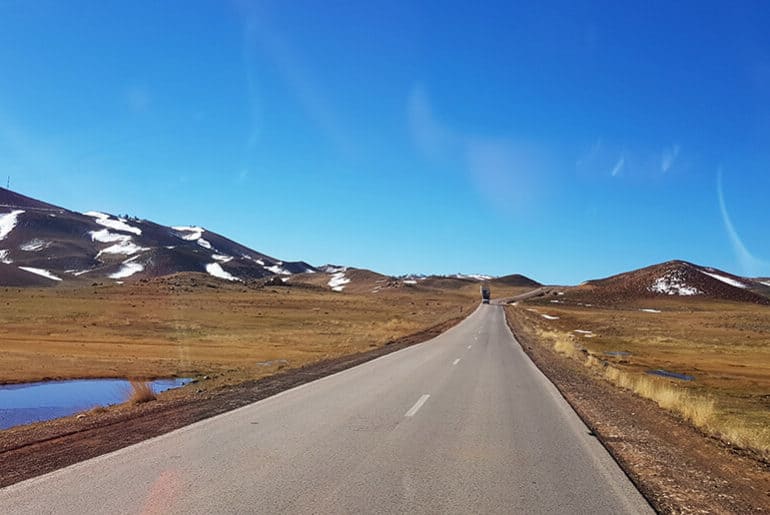 Azrou to Ziz Gorge: The Middle Atlas to the High Atlas Mountains